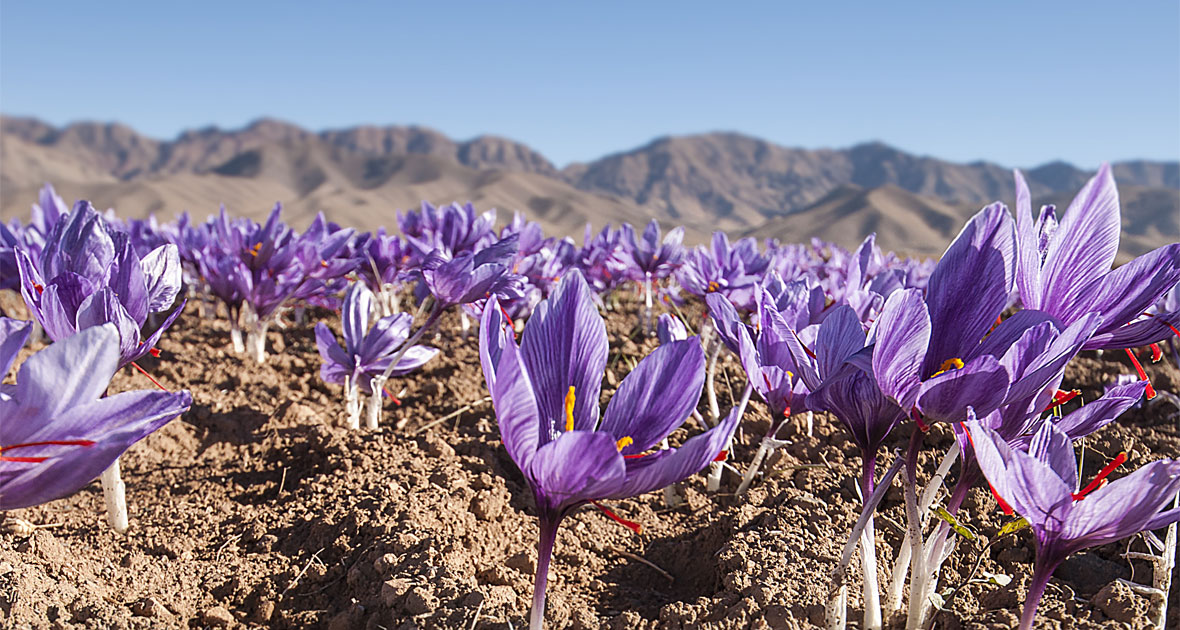 Saffron threads come from the beautiful Crocus Sativus, flowering in early fall in an assumptive belt bound by the Mediterranean to the west and the rugged region encompassing Iran and Kashmir to the east. Red stigmas of this unique flower will become the commercial saffron used world-wide if they are cured properly.

The fertile high plains of Khorasan in Iran are the source of the finest quality and the tiny crocus flowers are grown in this area. Each flower produces three delicate, aromatic, red stigmas known as saffron. Several thousand of flowers are required to produce one 1 kilogram of saffron. During the harvest time, each flower is carefully hand-picked and each stigma thread is peeled, toasted and packed to assure you of the highest quality saffron product. Because of the rare nature of this spice and the careful hand-picking required saffron has long been considered the world’s most highly valued spice.

Often referred as the “king of spices” or “red gold”, the singular aroma and flavor of this saffron will be a splendid addition to almost any chicken, vegetable or fish dish and a baker’s delight in many recipes. In Mediterranean countries, its place in the daily cuisine has reached almost religious proportions. And the natural health properties of this unique spice are universally recognized world-wide. Pure Persian Saffron is the key ingredient for making authentic international specialties: Spanish Paella, Italian Risotto Rice, Indian Chicken Biryani, French Bouillabaisse, Spanish Arroz con Pollo. Just a pinch will add the distinctive, elegant saffron flavor and each color that is so highly prized by gourmets around the world.

Saffron is a strange and precious thing, a product whose mystery and high price are amply justified by its legendary attributes. It is one of the few spices able to transmit not only flavor and aroma, but deep, rich color to food. Part of saffron’s special aura derives from its unique production process. The threads in which is usually sold are in fact the red stigmas of the Crocus sativus L. flower, of which thousands of them are needed for a kilo. In Khorasan, cradle of the world’s finest saffron, the flowers are picked at dawn, when they are at their freshest. In the evening the stigmas are plucked from the flowers, in the painstaking artisan process of peeling and toasting over the dying embers of a fire. The gorgeous yellow tint of saffron and its rich, piquant, faintly medicinal aroma are some features that make “saffron” a unique spice. This marvelous spice occupies a privileged place in the culinary life. 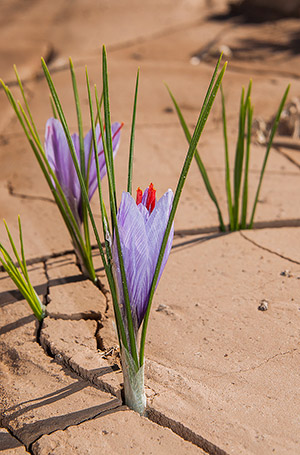 The threads are long and generously proportioned, with a range of color running from orangey yellow at the base to an intense, vibrant red in the centre and upper part of the stigma. Saffron has long been the object of fraud, adulteration, fakery and passing-off. Saffron ‘additives’ range from the relatively inoffensive (parts of other flowers such as carnation and calendula, ground red pepper, sandalwood powder and turmeric) to the actively unpleasant (threads of dried meat or colored gelatin, syrups and oils to add weight). Chemical colorings added to fake saffron include tartrazine, fucsine, amaranth (E123) and ponceau 4R. The world of saffron is rich in ironies, mysteries, and statistics which can seem deeply surprising. The world leader by a huge margin is Iran (93%). Just seven per cent of saffron production takes place within some other countries. 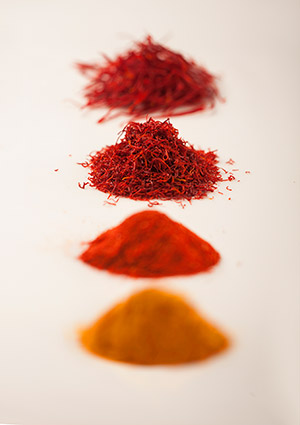 Without claiming to be a universal medicine, saffron is however a natural solution to many health problems.

In the East, saffron was generally used to treat light to moderate depression; it has the reputation to be cheerfulness and wisdom.

The spice has been well known for a very long time as a remedy against many ailments. It is among the richest plant sources of “riboflavin” (vitamin B2). It also contains Crocin and some Crocetins which are carotenoids, that is to say pro-vitamin A. Safranal, a volatile oil, gives saffron much of its distinctive aroma.

Whereas pigments play a stimulating function in digestion (using 0,5 to 1 g. per liter of water, saffron stimulates digestion), Safranal has a sedative action. In general, saffron is known to act on the nervous system. It would be both analgesic and tonic.

It allows heart rate to slow down as well as lowering blood pressure and even stimulate respiration. It is said to ease digestion, relieve the liver and also thin the blood.

At very high doses, saffron can be dangerous (>10 g ), which would be an exceptional case as the usual proportion is from 0,01 g to 0,02 g per person.

Saffron is rich in phytochemicals that act as antioxidants the body.

The authentic saffron is gluten free, making it suitable for coeliacs. If saffron is adulterated, it may contain gluten. Buy saffron strands instead of ground saffron to ensure the authenticity of this product.